To celebrare the second movie about my favorire comics character Deadpool I made his belt with aluminum casting technique. The design is not as seen in the movie but more like a comic version because I like the classic one better.
Both the locking pin and the belt loop could have been shorter, and the belt loop would have been better a centimeter wider too. Lesson learned for next time I’ll cast a belt buckle!

If you haven’t seen the film yet I highly suggest it. It’s totally awesome. Deadpool. 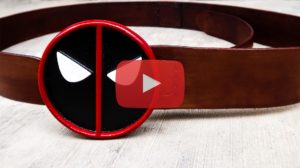